Most abandoned buildings, plants and areas appeared in the Soviet Russia (’70-’80) because they belonged to the “state” (meaning nobody) and afterwards (’90) as a result of the economic crisis. But each place has its own story (in which I, to be honest, do not have much interest).

I think we are all not indifferent to abandoned things. The Abandoned have some sort of a strong and complicated connection with our souls; some people get scared and try to escape their impressions, some fight with them and try to destroy or rebuild or just leave their own footprint on the abandoned site to prove that they’re stronger than this world. And some do not try to do anything – they just look and listen to the Abandoned, enjoying those impressions, feeling the real meaning of time. I am one of them.

Gdansk city is emerging as the next outsourcing city. As many other mid-size cities in the country in the last decade, as well as the capital Warsaw did since 1990, the city is harbouring a increasing number of multinational corporations that aim to outsoource certain business process. In a preious post I echo a very interesting article on the boom experience in this city due to the arrival of BPO to the city (Business Process Outsourcing). They represent nowadays the 30% of employment. As suggested by the major in that article, the “boom” is “rebranding the city”. This photos, taken at the so called “Oliwa Gate, the district where most of the BPO are being located, try to reflect visually this phenomenon. 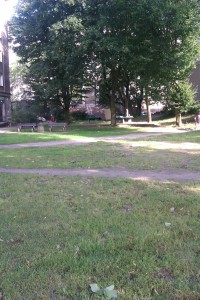 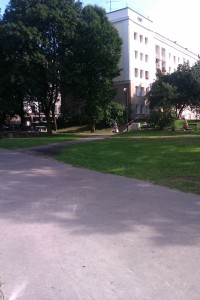 Yesterday I had the opportunity to attend a seminar entitled “Cities as International Actors – Internationalising the ‘Urban’?!” by dr Tassilo Herrschel. The seminar took place at Katedra Geografii Ekonomicznej of University of Gdansk and was organized by the department of Economic Geography. Tassilo is member of the Urban and Regional Governance Center (CURG) of University of Westminster, which at the same time is part of International City-Regional Policy Network, having as a partner the centre I mentioned in previous posts “Leibniz Institute for Regional Development and Structral Development (IRS)”. CURG’s current research projects involve, judging by the centre’s website:

The study of cities as international actors, drawing on debates in paradiplomacy, globalisation and urban politics and planning. This includes cities and regions as drivers of cross-border collaborations and, as a result, the production of new divisions and marginalisations on the basis of varying inclusion in policy networks. These ‘soft spaces’ (or virtual spaces) intersect existing governmental territorialities and raise important questions of democratic representation and legitimacies of policies. Examples studied include the Øresund Region, Region Skåne (southern Sweden) and the Fehmarn Belt.

During the seminar, Tassilo provided the main theories on internationalization and globalization and then showed some examples of regions as “cross-border collaborations” network. Concretely he exposed the case of Øresund Region, a transnational region in northern Europe.

As sociologist interested on urban and regional development processes, here are my thoughts and questions on the seminar: – Tassilo presented an interesting theory that contrasts two competing visions of the territory: first, the local or “inside” perspective and, secondly, the “internationality” perspective. The first emphasizes the importance of local networks, i.e., the interconnection between the different local actors and different towns or villages in a given territory. On the other hand, the “pro-internationality” one that emphasizes the importance of build international networks and where the “elite cities” stand as agents of the whole country or region. Needless to say that the second one is more dominant. However, this paradigm involves a number of problems like the ones I have addressed in previous posts: mass tourism, exorbitant house and/or prices and inequality in large cities. – Tassilo also explained the debate between those who view cities as emerging international actors and those who see States as the still dominant actors. I think that the most recent financial/economic crisis has highlighted the importance that States still have in designing and implementing development policies and in the articulation of cities and regions (such as the world system theory suggests). What is more, the crisis has revealed the importance of supranational institutions such as European Union or European Central Bank. In other words, macroeconomics seem to have more importance on economic and urban performance than the fact of implementing one or another local or regional strategy. – Final questions led to an increased focus on Trojmiasto as an urban region, i.e., the metropolitan area consisting of the cities of Gdynia, Sopot and Gdansk. One of the participants encouraged Tassillo to pose his own opinion on Trojmiasto as a region and international actor and, more specifically, what could be its driving forces. Its location around the Baltic was pointed as a crucial factor. Another advantage suggested the fact of being interconnected via a urban railway. (But he was quite honest when saying that is not a place that first come to mind when thinking of a top destination in Europe). As far as the baltic location as competitive advantage is concerned I couldn’t agree more. However, the current development policies make me wonder whether the location is seen as a crucial factor of development by decision makers. It seems to me that other factors are considered as more relevant. The economic growth experienced in Poland over the last decades was based on attracting foreign investment via low wages and tax-breaking policies. Not only industrial companies (mainly German capital) but also service and information related ones. Trojmiasto is a good example of the latter one. Such companies as Reuters, Kemira are becoming the real driving force of the local economy (together, I think, with the mere immigration process from rural areas around Trojmiasto and other parts of the northern Poland) As one friend of mine say a few years ago, these companies are the shipyard of the XXI century. What are the socioeconomic impact of this strategy? Good question to be addressed in the future. In this context, the fact of being geographically part of the Baltic region does not necessarily mean to be part of it in socioeconomic terms or, at least, not like a partner but just as a what it is, low wage location for foreign investors. In other words, I think that the World system theory is confirmed here. Doesn’t matter how close is to Finland or Sweden. The role of “peripheral” (and post-socialist country) in socioeconomic terms might still be determinant. The question is: is being a low-wages based economy an inevitable step prior to become a more advance economy? To what extent will this result in improved quality of life for residents. – Finally, and outside the content of the presentation, here is a little reflection on how the seminar was conducted. I missed a more attractive opening, something like a general question or objective of the presentation. I have no doubt that the content was interesting, but the effort to make something clean was higher than expected. Thus, I personally felt a bit exhausted at the end. Likewise no specific questions were asked to encourage the final debate. I think all these factors negatively influenced the final discussion. Questions were asked, but I think a true group dynamic was not reached. This is, however, something very common in the academic world and that I also do. What happens is that from outside it is easier to identify.